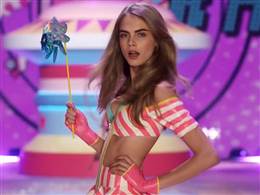 At Big Sister, we pride ourselves on staying up-to-date about gender-specific marketing; marketing strategies could not be more gender-specific than those of Victoria’s Secret: a corporation famous for their bras and underwear, and most recently for the popularization of their PINK line. PINK is Victoria’s Secret’s line for their younger 15-22 year-old demographic. However, Victoria’s Secret has gone younger.  Victoria’s Secret has recently come out with a line called “Bright Young Things,” otherwise known as PINK’s Spring Break collection. Bright Young Things features, among other things, underpants that have “Wild”, “Call Me”, “Dare You”, and “Feeling Lucky” printed on the back (or the front, in cases of the thong). Not only are they covered with sexualized phrases, they are cut in familiar Victoria’s secret styles of “cheeky hipster,” “lace trim thong,” and “The Date Panty.”

When a tween or teen girl sees her peers wearing PINK merchandise, few things will make her want it more than getting a “no” paired with a “because I said so” from her parents and mentors. This is why it is not enough to ask that Victoria’s Secret simply eliminate the collection. PINK will still be there. This is why it is not enough to tweet at Victoria’s Secret that this collection is unacceptable and leave it at that. The fact is, no matter how hard we try, young girls will continue to see these sexualized media messages, through other advertisements.

We need to educate these young girls.

Maybe they are daughters. Maybe siblings. Maybe they are our Little Sisters. Regardless, they need to know that when their parents, teachers, Big Sisters, and other mentors tell them to think critically about the messages on the backs of these underpants, it is not because we do not want them to be popular, or because we do not want them to succeed. On the contrary, we want them to succeed more than they know. We want them to succeed in finding relationships with people who will hear “call me” after a conversation about mutual likes and common goals, not see it on the front of their thongs. We want them to know that while Victoria’s Secret may see them as Bright Young Things, we see them as Bright Young Girls, and that alone makes a difference.

So the next time a young girl in your life asks why you think she shouldn’t choose “Wild” underwear, talk to her about why she feels she needs them. Talk to her about the social and media pressure she may be feeling. Encourage her to come to terms with her body and what she wants to do with it on her own terms, not her friends’ terms, or Victoria’s Secret’s terms. Teach her that success is not about what she wears, but what she knows and where she goes with that knowledge.

What are your feelings about Victoria’s Secret’s marketing campaign? How do you respond to the overwhelming pressure of the media? Do you have any advice for Big Sisters who don’t know how to begin that conversation? Leave a comment below.

Gender Specific Marketing – Does it Need to Stop?

Have you ever walked into a department store and wondered why the toy section for girls is filled with dolls, pink Easy Bake Ovens and toy make-up kits while boys have a section filled with action figures, blue sports equipment, and toy guns? Well, you won’t find that at Harrod’s Department Store in London, which is taking a new marketing approach to selling toys. Instead of the typical gender specific sections found in most toy stores, they created a “Toy Kingdom” where toys are organized by their own “worlds” such as circus and tree-top. By doing this, they have opened the door for praise and criticism.

For some, this is the exact change that is needed for kids to make their own decisions on what types of toys they want to play with instead of older generations deciding for them.

“Kids get a lot of ideas early from play about what they can do, what they like and what they can aspire to,” said Deborah Tolman, co-founder of SPARK, a girl-fueled activist movement to end to the sexualization of women and girls in media. “By making those themes gender specific, it leaves out a whole range of possibilities.”

Lego received a lot of heat this past winter for “Lego Friends” their new toy line for girls with Lego colors changed from the original red, green and blue blocks to pale greens, pinks, and purples and offering kits to make Lego vets or ice cream shops. Although there was a lot of backlash, many marketing experts called Lego’s marketing strategy smart.

“Segmentation is the key to marketing and the further you mine into the segmentation the stronger your message will resonate with the audience,” says Emily Spensieri of advertising firm Quiller and Blake/FEM.

Also, researchers have found that children have an inherent preference for certain types of toys that is demonstrated as early on as infancy. Girls like “girls toys” before they realize that they are girls. A 2008 study of rhesus monkeys found that the males preferred trucks to dolls.

Regardless of whether it is smart to market toys based on gender or if toy preference is an innate choice, it may have a negative effect on a child’s identity when companies predetermine what their interests should be through marketing strategies.

Lisa Serbin, research chair in human development and professor of psychology at Montreal’s Concordia University, says that the problem with targeting toys is that “it reinforces the stereotypes and reinforces the separation of play groups. You’re not expanding their horizons or encouraging them to try something new. Do we really want to limit girls to things that are colored pink? To me that’s bizarre.”

Harrod’s is not the only store that is changing the way it displays its merchandise. Toy Et. Cetera also markets its toys based on types of activities rather than gender, with an increasing numbers of independent toy stores doing the same. So, should this trend that should continue or are we being too sensitive to the impact that gender specific marketing can have on kids?

Do you think gender specific marketing has an adverse effect on girls’ and boys’ identities?

Do kids learn at an early age what toys are “gender appropriate” or is it an innate characteristic in both boys and girls?

What role does toy choice for boys and girls have on childhood bullying?